When I thought about what posts to write for gifts month, I knew, I just knew I had to ask my friends Shelly and Jershon to guest post (again. check out their creative date ideas here).

They are the most creative gift-givers I’ve encountered. And I like to think I‘m no stranger to creative gifts.

Shelly is playing it modest in this post by highlighting Jershon’s gifts to her, but make no mistake, she is no amateur creative gift-giver herself.

Proof: she created a holiday called “The best husband in the world day,” which they celebrate annually.

​Creative Gifts for Her

Since we got married, this has always been a hard one for me. I haven’t ever felt like I’m good at giving gifts – to my husband at least.

Yes, I have given him several gifts over the last 8 1/2 years of our marriage, and he has always shown gratitude for them, but I have often felt a little bummed after holidays and birthdays feeling like my gift giving wasn’t very successful, like he didn’t love the gifts that I have given him.

The thing about Jershon is that he is a super simple guy. When it comes to gifts, he doesn’t really need anything or want anything. The main gift that he wants for holidays and birthdays (and regular days) is something that money can’t buy. I’ll just leave that up to your interpretation. Haha.

I asked him to sum up his personal view of receiving gifts and he said “I’m a simple man. My favorite gift is getting physical with my hot wife. Besides that, I like the funny or practical.”

It’s taken me several years (and I still have room to grow in this area) to just accept that and be happy with giving him the kinds of gifts that he wants to receive – instead of the kinds of gifts (material possessions) that I feel social pressure to give. I have to keep reminding myself that he is not a woman. Haha. He isn’t trying to make me read between the lines and read his mind. He is telling me exactly what he wants. And he actually wants those kinds of gifts.

It’s true, he loves funny and/or practical gifts. He is all about the gag gifts. Several months ago, we were talking about this and he told me that he wants me to pull pranks on him for holidays. He said that he wants pranks that are hilarious and embarrassing. He specifically said “like I want to wake up on Christmas morning, tied up in the desert in my underwear…or something like that.” Hahaha.

If you know me in real life, you know that pulling pranks is not my speciality. That kind of stuff does not come naturally to me.

But! Because Jershon has expressed his desires, I have tried to pull a couple of pranks on him. You know, really big stuff… like putting blue food coloring on his toothbrush. 🙂 I went to bed giggling to myself that night, just imagining his teeth turning blue the next morning when he went to brush his teeth.

Unfortunately, that ended up being like the only morning EVER that he, for some reason, got his toothbrush wet before brushing his teeth. I always do that. He never does. And he didn’t even do it because he thought his toothbrush looked weird or anything. It was just a freak accident! Haha. So, prank #1…fail. But it was still funny when I told him about it, so I guess that counts for something.

Another time, I bought some poppers (you know, those tiny little fireworks that you throw on the ground.) My grand vision was to put them under the toilet seat so when he sat down, they would make a really loud noise and he would think that he broke the toilet seat. I had the poppers sitting around for days… just waiting for the opportune time. Now, if I was playing this prank on a girl, this would be easy peasy! Girls always sit down! But a guy? I had to wait for him to go #2. TMI? 🙂

And waiting for someone to go #2, let alone waiting to plant poppers under the toilet seat lid at just the right moment, is not an easy task. I’ve got four kids to take care of! I can’t be watching Jershon’s every move!

Well, lucky for me, Jershon sometimes likes to announce to the entire world that he needs to go #2. So one afternoon he made this announcement. This was my moment! I froze and kind of panicked. I said “uhh… wait just a minute. Go up to our bathroom in a couple minutes.” Not suspicious at all. I was made for this prank pulling business. 🙂

A few minutes later, after everything was all set up, I sneakily followed him up to our bathroom. I stood outside the half-closed door, where he couldn’t see me, waiting with bated breath. And then I heard it. BANG! CRACK! *manly* SCREAM! **laughter**. Hahaha. I couldn’t contain myself. I went in there and explained what had happened. He thought it was pretty funny. He really did think that he broke the toilet seat at first. 🙂

I’d say I’m well on my way to transporting him to the desert in the middle of the night, tying him up, and leaving him wearing nothing but his underwear. 🙂 …I may need to take some pranking classes.

So I’m working on the gift giving side of things. I do however feel like I have been really fortunate in the gift receiving category.

He doesn’t necessarily love to write, but he knows that I love it when he writes mushy stuff to me. So the bulk of these “love gifts” are handwritten notes and cards (often accompanied by one of his hilarious drawings.) He is really creative and often writes his letters to me in the form of poetry.

In fact, the first gift he ever gave me (for my birthday when we were dating) was a poem that he wrote for me. He stayed up until 3:00 am writing it. He wrote the poem on three different layers of transparency, so when they are all on top of each other you can’t read it, but when you take each piece out at a time, you can. Behind the transparency, is a picture of rocks and flowers that he had taken on one of his hikes. 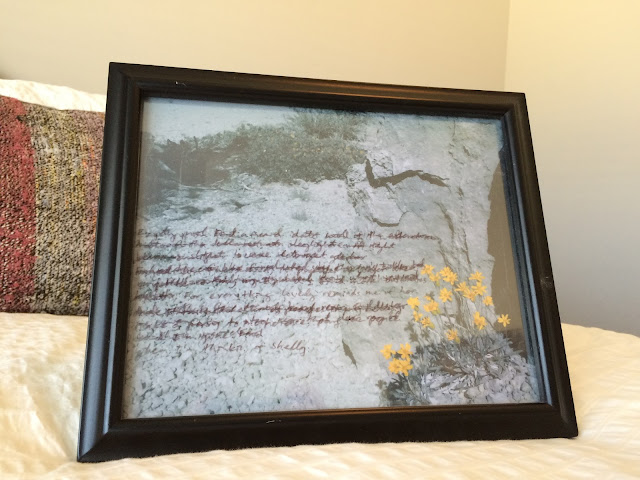 For my 22nd birthday, Jershon wrote 22 poems for me and compiled them into this little book. 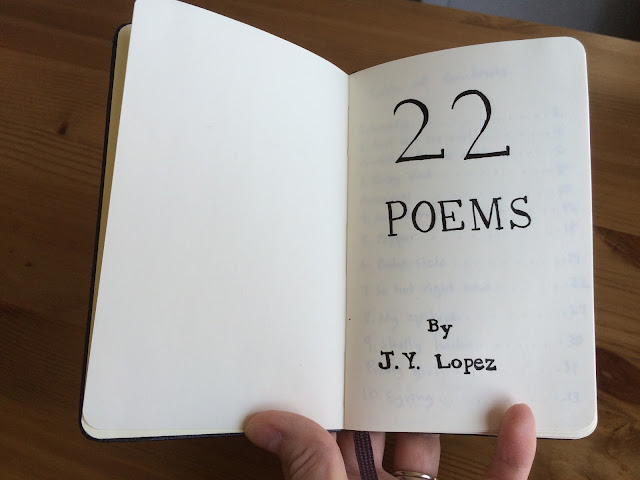 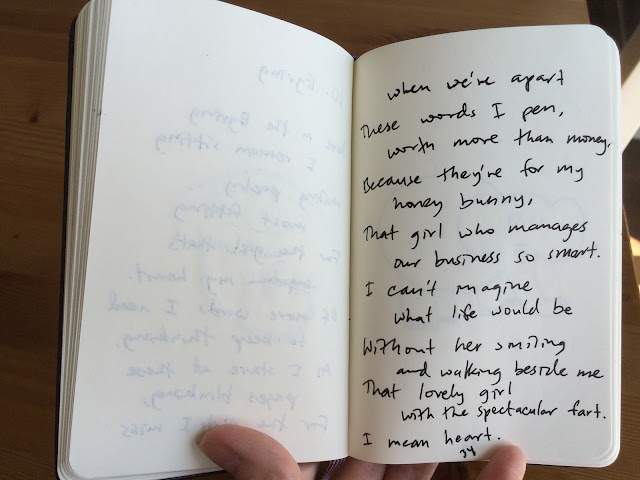 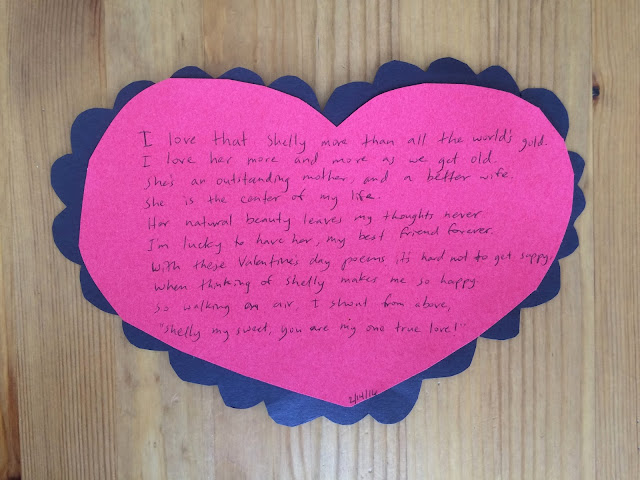 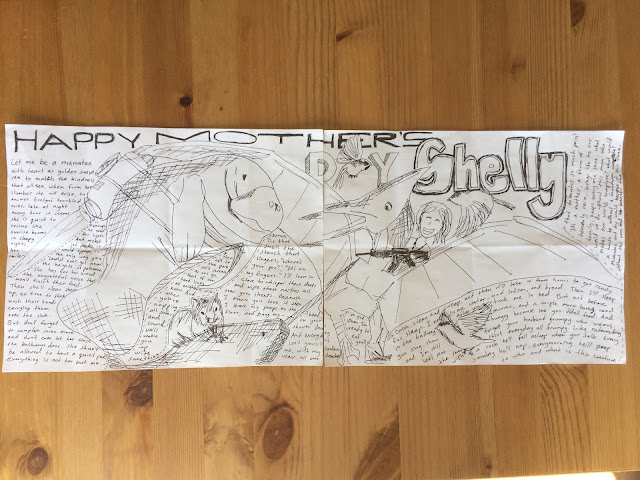 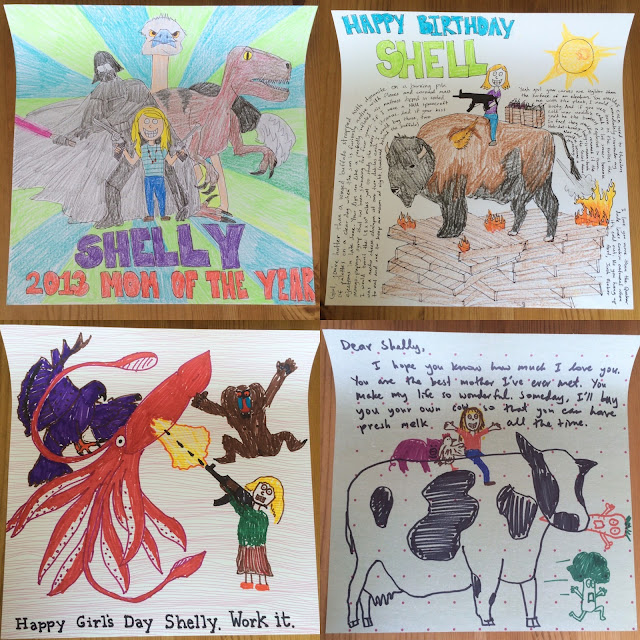 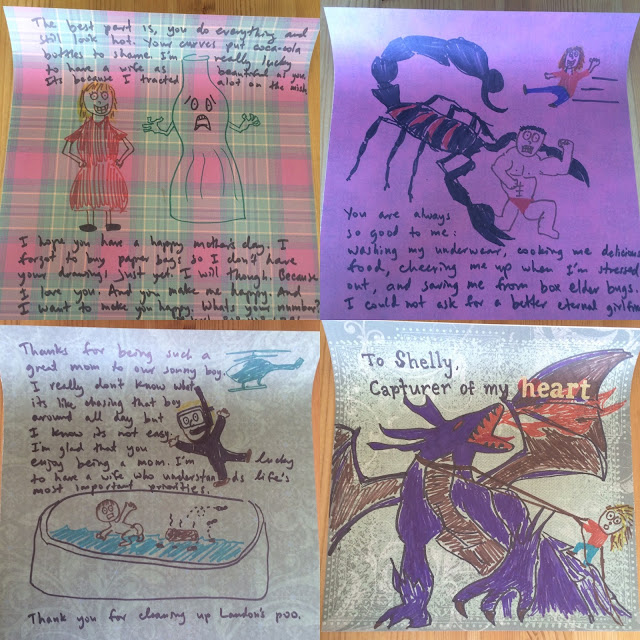 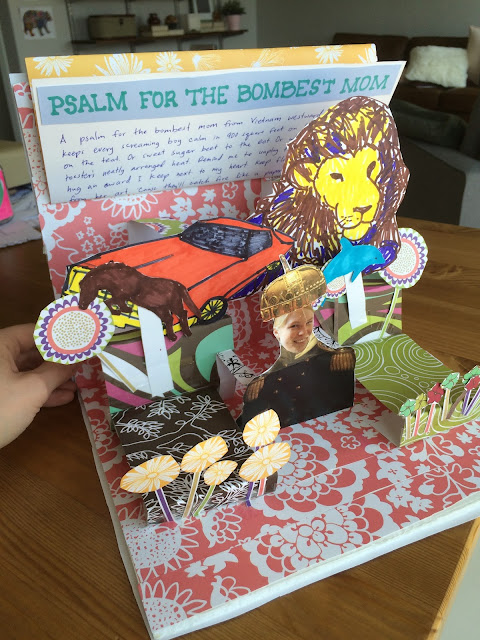 He got fancy with a homemade pop up card for Mother’s day one year. 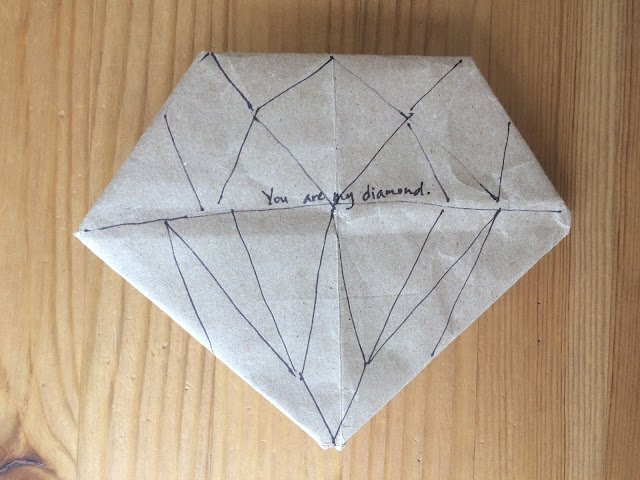 Sometimes he does some fancy origami folding and when I open it up I find a mushy note. 🙂 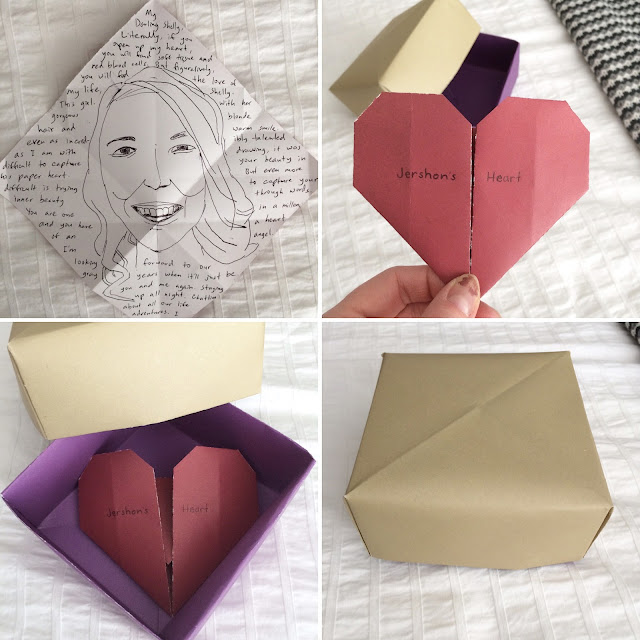 I am a crazy journal keeper.  I love to document my own personal life and our family life.  It’s one of my passions.  Jershon on the other hand… he isn’t a lover of journaling.  But, he knows how much I would love it if he wrote down some things here and there from his perspective.  So one year, for Christmas he gave me this little book.  And throughout the year he wrote about little everyday moments and experiences.  I love that he did this.  I love that we have a little record of the year 2013 from his perspective. 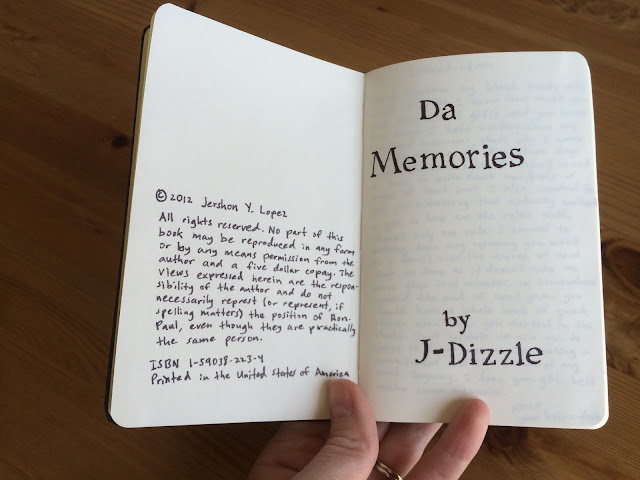 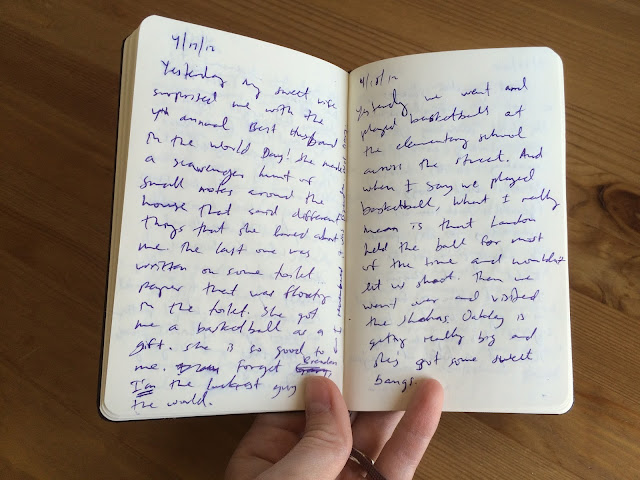 My birthday is June 26th so the year that I turned 26, it was my golden birthday. I had always looked forward to my golden birthday. Jershon knew this and wanted to make it extra special for me. I have no idea how he came up with this idea, but he made this sweet present for me.

First he gathered pseudo tweets about me from my friends and family. And then he was trying to figure out how to put them all together and wanted to have them “scroll” somehow. Being the creative genius that he is, he got an old VHS tape, took the tape out of it, taped all of the “tweets” together in a really long thin strip and then wound them back into the VHS tape.

After every act of kindness that I did throughout the day (that’s what I wanted to do to celebrate this special birthday), I would get to turn the tape and read the next “tweet” as it scrolled across. It was really fun to read little thoughts that my friends and family have about me. 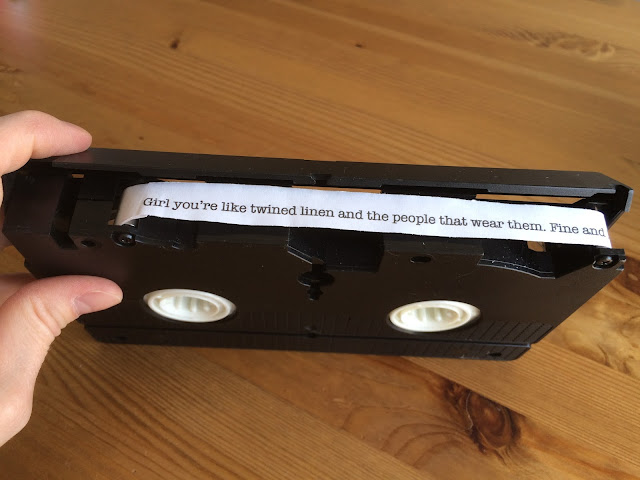 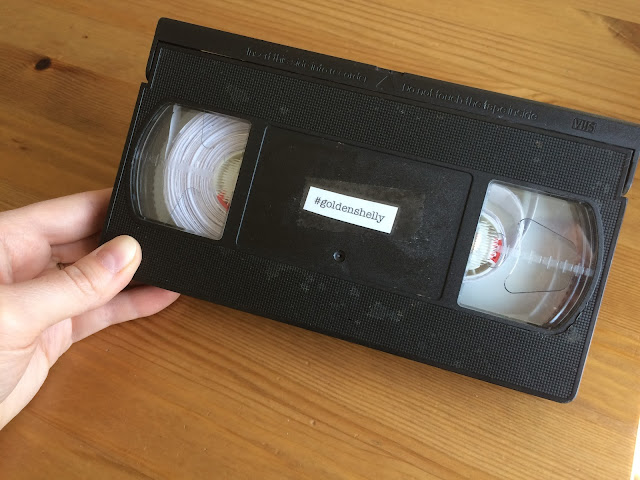 Another gift that Jershon gives me fairly often are flowers. Almost every time that he runs to the store, he brings home some flowers for me. I usually take pictures of them just because I want to remember them. Here’s a collage of a bunch of those photos from our 8 years of marriage. 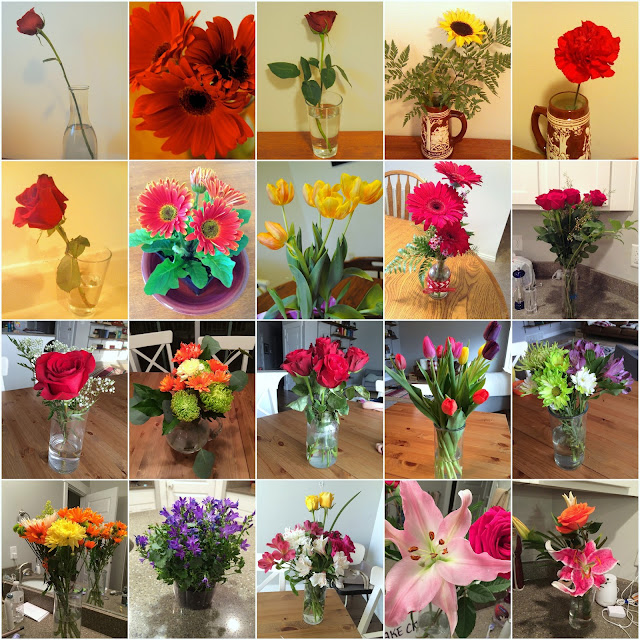 This past Christmas, Jershon gave me one of the best presents ever. He had been mentioning it for a few weeks about how excited he was to give me his gift. He kept saying that it was from the heart and it was the type of gift that I would love.

So, I opened up the box (it was a medium sized box) to find some packing bubble things and a small folded piece of paper. It was folded into the shape of a heart. 🙂 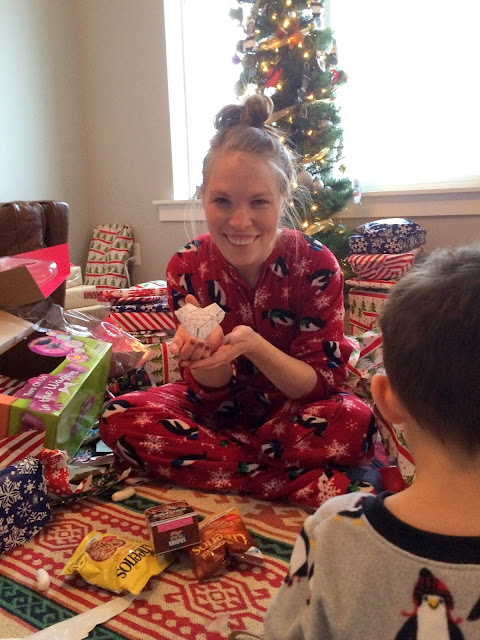 I unfolded it, and noticed that on one side, it had something colored, and the other side had writing. I asked if I should look at the written side first, and Jershon said yes. So I read the note…

*** blah, blah, blah, a bunch of mushy stuff……*** 🙂 (actual message removed because it’s probably boring for you guys (whoever you are that is reading this) to read. Haha.)

Oh, and I wrote you a love song.

All my love,
Jershon”

Right as I was reading the part about how he wrote me a love song, I was still processing what it said when Jershon started playing a song on his phone. This song:

I turned over the paper and looked at the drawing (Jershon drew a picture of us sitting on a horse together. Jershon dressed as a cowboy, and me sitting behind him.)

I just looked at the picture the whole time I was listening to the song. It was so sweet. I started crying a little as I listened. The song was so cute and romantic and touching. I also laughed at some of the parts. Jershon always writes funny things to me.

After the song was over, Jershon told me about how he wrote the lyrics and then hired someone online to compose the music, sing it, and record the song.

The song is called “What is This Shelly.” Jershon is so sweet. What a thoughtful husband. 🙂 He knows how much I love when he writes things for me, and this was just over the top. 🙂 I had never had my own love song before.

So the point of this entire post is that Jershon tries (and succeeds) to give me gifts that he knows I would love to receive – even when they require a lot of work and creative effort on his part. And I am learning to do the same for him – throwing societal gift giving pressure out the window and instead giving him the kinds of gifts that he really appreciates and in the way that he feels loved.

Does anyone know where I can get a degree in pulling pranks? 🙂

2 thoughts on “Creative Gift Ideas for Her: Come Learn from the Master”